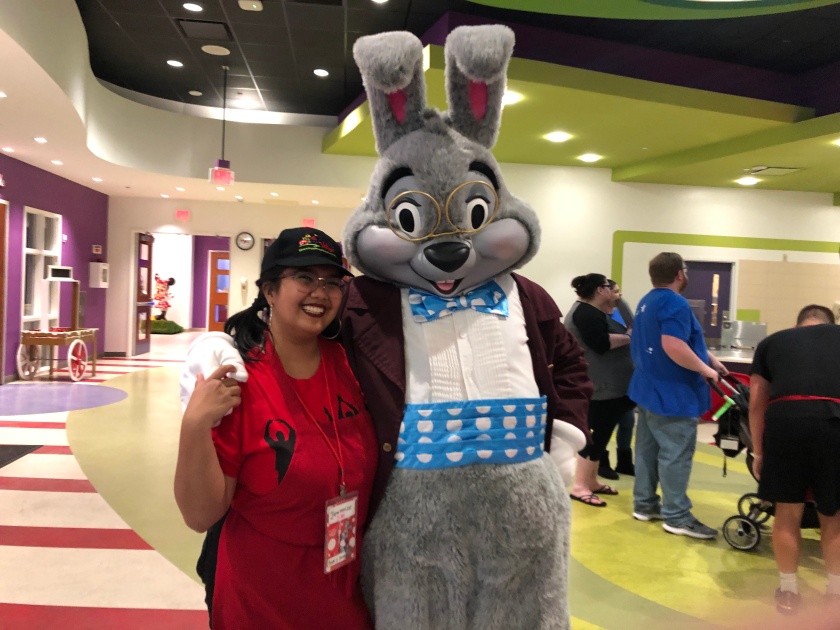 This year, I chose to be an advisor for one of the Buck-I-Serv (Ohio State’s alternative break service learning trip) experiences and I’m so glad I did. This wasn’t an opportunity I got to do while I was in undergrad, which is why I wanted to be a part of this.

We went to Give Kids the World Village in Orlando, FL. The non-profit 84-acre resort provides cost-free vacations for children with critical illnesses and their families, including meals, accommodating activities, and so much more. The founder, Henri Landwirth, is the Walt Disney of GKTW. He was a man with a dream and a mission, and now his legacy is changing lives.

Parts of the GKTW Village

Village: There are hundreds of home-styled housing for families to stay in. Each home is decorated and furnished. At the driveway, there’s a post of their “Mayor” (a bunny named Mayor Clayton and his wife Miss Merry) and he holds a sign with the family staying there’s name. They have a hotel-like building for additional spaces for families to stay in. The village homes and buildings are painted very colorfully.

Amberville Arcade: They had a huge arcade games space and it had a ton of aspects to it. In one of the areas, there was a motorcycle racing game, a pool table, an air hockey table, Wii/XBox/XBox One system and games (which I alphabetically organized during one of my shifts), a duck pin bowling game, two arcade games systems, and a Pac-Man table game. Then there was a large room with an interactive miniature town and model train set, which was made specifically for GKTW. It lights up and makes sounds, and a train that moves around the entire town. In a smaller area, there was a “Captain Cabin” where kids could be boat captains and navigate little boats in the water area. Right outside are a ping pong table, a skeeter’s ball, and basketball arcade games. I owned it at basketball! There’s also a miniature gold course, with various golf club sizes and golf ball colors for everyone to play.

JJ’s Express Train, Kelly’s Sunny Swing, and Lori’s Magical Flight: I got to be a ride operator for various rides, which the coolest thing is that they can all be ridden by children on wheelchairs. One of the rides was this butterfly/caterpillar ride (Lori’s Magical Flight) where you pedal for the “vehicle” to go up and seem like you’re flying. If you’re familiar with Disneyland, it’s kind of like the Dumbo ride! Another ride was basically an up to 8-person swing with a spot in the middle to accommodate for a child on a wheelchair (Kelly’s Sunny Swing). The kids’ favorite ride was definitely the train ride, JJ’s Express Train. The path of the train went around Amberville’s building, where you could see the pond/lake and dinosaurs and a cave. The ride goes for literally 3 minutes but the kids love it.

Gallery of Hope: In the gallery, which is basically their museum, they have the whole history of GKTW Village. One side has the history of how the village was built. There’s a miniature model of the whole village. On the walls were the history of each part of the village being built, including the year or who donated or the story behind it. Towards the middle, there were several TVs that played stories about the village, the children, the volunteers, and so much more. There is also a stature of Henri Landwirth, who was the founder of Give Kids the World. He was also a concentration camp survivor. He built the village after serving as a hotelier and the hotel couldn’t accommodate the little girl at the hotel. He made a promise in his village, that would not be the case. The other side of the caller was images of the hundreds of volunteers that GKTW Village has had over the years. The village runs with about 200 administrative workers, but the village would not run without the volunteers.

Towne Hall: All dining takes place in Cafe Clayton/Gingerbread House. My favorite thing is that volunteers could be tray holders for the kids where we walk with the kids as they pick out their food. It’s so nice to see them get so excited picking their food and drinks. It’s just so heartwarming to hear them talk about things they’re also excited about. There are other rooms in the building that they use as event spaces. The ice cream parlor is supposed to be its own shop, but they’re redesigning so it’s currently inside Towne Hall.

Other parts I didn’t get to see/experience were:

They have special events and shows that they do every week in the village, with the inspiration that not every kid will get to celebrate every holiday. They want to make sure that no matter what happens, the kids will get to experience everything they can possibly experience in terms of memorable holidays and events. They literally have something scheduled for every day:

Gallery of Hope: I read a story about this little boy who had cancer. His family seemed to have made the book because of its binding and just the structure. The story is about a little boy and he had cancer, but remained lively and happy regardless of his condition. It was a beautiful story about his life and the impact Give Kids the World had on him, even talking about how he was more excited to be at GKTW than Disney World or Universal Orlando because there were more accommodating for him at GKTW than there were going to be at other amusement parks. The boy has since passed but his family really brought to life his story and the joy GKTW brought him in his experience.

Tray Carrier at Towne Hall: These kids were some of the kindest, most respectful, and humorous storytellers I’ve ever encountered. One of the children I was talking was so excited about going to Disney World and getting a princess makeover. I told her about asking them to put coloring in her hair and she got excited about having purple hair, because it is her favorite color.

This trip really had me think about how easily we take for granted our abilities, our experiences, our lives. Even those people in our lives who experience a near-critical health challenge, we take for granted their survival in the long run if their health no longer affects their present experiences. It was beautiful to just get away from the little details we stress over on a day-to-day and just find some appreciation for what we do have and what we take for granted.

I’m forever grateful for this experience and to have had such an amazing group of students to be my first group to advise on a service learning trip. This isn’t one I’m going to forget.

Learn more about Give Kids the World on their website at: https://www.gktw.org/